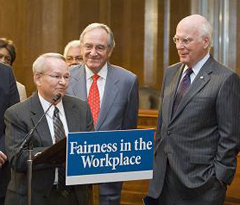 Based on the outcome of a lawsuit that started in central Iowa, U.S. Senator Tom Harkin is introducing a bill today he says will help prevent older Americans from being treated unfairly in their jobs. Harkin, a Democrat, outlines what he says would be accomplished in his “Protecting Older Workers Against Discrimination Act.”

“It would be clear that the burden of proof would shift to the employer as long as the employee could show that age was a factor in that employee being demoted or fired or whatever,” Harkin says. Earlier this week, Jack Gross, of Des Moines, testified before the Senate Judiciary Committee about how he was discriminated against at his job because of his age.

“Jack worked for nearly a quarter of a century as a claims adjuster for FBL Financial,” Harkin says. “He was a model employee with performance reviews in the top 3% of the company for 13 consecutive years. Then in 2003, his company brazenly demoted him and other employees over the age of 50 and gave his job to a much younger, less qualified person.”

An Iowa jury found in Gross’ favor, but the U.S. Supreme Court overturned the ruling. Under the proposed legislation, Harkin says the employer would have to clearly demonstrate a reason other than age why the person was demoted or fired.

He says the bill will “restore fundamental fairness in the workplace” and it’s supported by AARP, the Leadership Conference on Civil Rights, the National Senior Citizens Law Center and the National Women’s Law Center.