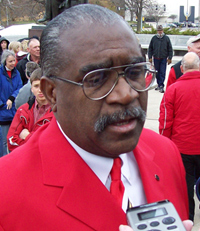 A lifelong Democrat who is the president of the Iowa-Nebraska chapter of the NAACP has endorsed Republican Bob Vander Plaats for governor.  Reverend Keith Ratliff of Des Moines says the stand Vander Plaats has taken in favor of traditional marriage was a factor.

“Family is very important to me,” Ratliff says.  “Family is not the only issue and so they’re all, certainly, weighted together.” Ratliff voted for Chet Culver, a Democrat, in 2006.  But Ratliff says as governor, Culver hasn’t moved more quickly to address complaints that state hiring processes are skewed against minorities.

“I think it’s reprehensible what has taken place and I think it’s taken too long to get this process moving in a positive direction,” Ratliff says.

Ratliff, pastor of the Maple Street Baptist Church in Des Moines, says his endorsement is a signal to Democrats.

“Minorities shouldn’t be taken for granted, that they should automatically vote one way,” Ratliff says.  “And so I think by having more dialogue and having more results that actually show improvements in minority communities will certainly help minorities to make decisions that they feel they need to make, but just to say that a person is a particular party, that they automatically should vote that way, I think is a big mistake.”

Ratliff, who has never voted for a Republican before, isn’t sure whether he’ll vote Republican in next June’s primary and then switch his party registration back to Democrat or remain a Republican.

Vander Plaats went to Ratliff’s church office to ask for his endorsement and got it.  As for Ratliff’s complaints about discriminatory state government hiring practices, Vander Plaats describes himself as an “atypical Republican” who would address those concerns.

“Meaning you look at my background and the way I was brought up and my core values and beliefs, you’d say, ‘There’s no doubt Bob’s a conservative Republican,'” Vander Plaats says.  “But you take a look at my 11 years in public education and you take a look at my seven years as being a CEO of a health care and human services organization, it’s all been based on giving people opportunity, not regardless of being Republican or Democrat, but because that’s what you do.  You do the right thing because it’s the right thing to do.”