You are here: Home / Agriculture / Christie Vilsack: “I’m well-qualified” to run for US Senate 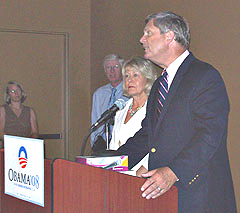 Christie Vilsack, the wife of former Iowa Governor Tom Vilsack, sounds as if she may be the “mystery candidate” the chairman of the Iowa Democratic Party said was poised to run for the U.S. Senate.

Republican Chuck Grassley will seek a sixth term in the U.S. Senate in 2010 and, so far, two eastern Iowa Democrats who once served in the state legislature have announced they’re running.  But during an interview with WHO TV, Christie Vilsack — a lifelong Democrat — revealed she’s considering a run for the senate herself.

“I am honored that people would think of me in that way and would talk to me about running for any office and I think I’m well-qualified to run,” Vilsack said.  “I think I’m qualified to serve, so time will tell.”

Vilsack isn’t ready to jump in the race just yet — and she’s giving herself enough room to decide not to run.

“You know, I’ve spent the last 12 years traveling around the state, developing a relationship with the people of Iowa and I just really appreciate the fact that people have been so supportive in suggesting this,” Vilsack said. “But, as I said, time will tell.”

Vilsack suggested it’s not just Democrats who’ve been encouraging her to run.

“I’m really honored that people on both sides of the aisle would see me as being a candidate,” Vilsack said.

During the interview, Vilsack said she wasn’t “at that place, yet” to make a decision, but made clear she’s been thinking about a race against Grassley.  For example, Vilsack said her husband, U.S. Ag Secretary Tom Vilsack, emailed her Tuesday afternoon, telling her Senator Olympia Snowe of Maine was the only Republican on the Senate Finance Committee to vote for the health care reform bill.  Mrs. Vilsack made reference, then, not only to Snowe’s “yes” but to Grassley’s “no” vote.

“You don’t make history by voting ‘no,’ and so Olympia Snowe is making history today and I’m really proud of her as a legislator, as someone who is stepping up to the plate and I’m proud that she’s willing to work in a bipartisan fashion and I think that that’s really what we should all be doing right now,” Vilsack said.  “It’s what I do in my work every day.  It’s what I did as first lady.”

Vilsack spent much of Tuesday on the Iowa State University campus, talking with students about preventing pregnancies.  Vilsack is executive director of “The Iowa Initiative” which seeks to prevent “unintended” pregnancies.  She also was fitted with a special jacket made for her by several Iowa State professors. Vilsack will wear the jacket as she accompanies her husband to the World Food Prize gala Thursday night.  The fabric’s print features tomatoes and Vilsack said she’ll wear it as she makes other appearances on behalf of her husband, the ag secretary.

“Tomatoes sort of, you know, there’s some disagreement. It’s supposedly a fruit, but we really think of it as a vegetable and it’s bright and I like the reds,” Vilsack said.  “And I love tomatoes — absolutely love tomatoes — and I think it’s one of those foods that sort of crosses boundaries…I could (have chosen) corn, but…a tomato is more universal.”