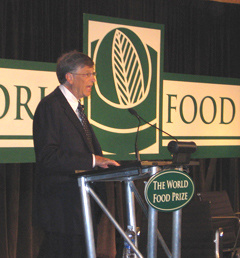 Technology guru Bill Gates is defending the use of genetically engineered crops to help fight global poverty and hunger. The Microsoft chairman delivered the keynote speech at the World Food Prize Symposium in Des Moines this morning.

“Some voices are instantly hostile to any emphasis on productivity,” Gates said. “They act as if there is no emergency, even though in the poorest, hungriest places on earth, population is growing faster than productivity.” 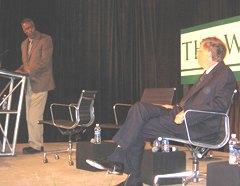 “The grants will provide training and resources that African governments can draw on as they regulate biotechnology so they can make science-based decisions customized to local conditions about what advances will best serve farmers, consumers and the environment,” Gates said.

A Stanford University study, published last year, claims farmers in southern Africa will lose 25% of their productivity by 2030 if they continue to plant the same varieties of corn. Gates cited the study about climate change to emphasize his point about the need for transgenic crops.

“The charge is clear. We have to develop crops that can grow in a drought, that can survive in a flood and resist pests and new diseases,” Gates said. “We need higher yields on the same land despite the difficult weather.” Gates says one his foundation’s current projects involves the development of drought-tolerant corn for farmers in Africa.

He technology will be licensed royalty-free to seed distributors so the new seeds can be sold to farmers without any extra charge. “If the seeds perform well, African farmers can expect to produce two-million more tons of maize in a year of moderate drought,” Gates said. Following his speech, Gates fielded several questions from 2009 World Food Prize laureate Doctor Gebisa Ejeta.  Hear their conversation via this link: Gebisa/Gates 16:25 MP3