You are here: Home / Military / Over 3,900 Iowa Guard soldiers notified of possible deployment 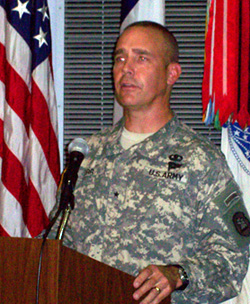 Iowa National Guard leaders have notified over 3,900 Guard soldiers across the state that they may be sent to Afghanistan next fall.  It would be the largest deployment of Iowa Guard troops since World War II.

Brigadier General Tim Orr says 3,400 solders from the 2nd Brigade Combat Team, 34th Infantry Division have been notified, plus 500 soldiers from other Iowa National Guard units have been put on notice they may be called in to support the mission.

“I want to emphasize that this only an alert for a possible future deployment.  Plans do and have changed,” Orr said during a news conference Tuesday afternoon.  “We’ve had units alerted and de-alerted for missions since 2001.”

The soldiers who’ve been notified have been advised to stay in school, if they’re in college, and those who are working in the private sector have been told to keep working, as the Guard units haven’t been told where or when training will be held, prior to their deployment overseas.  Colonel Thomas Staton, brigade commander of these “Red Bull” soldiers who’ve been notified of this potential deployment, was on a similar mission in Afghanistan in 2007 and 2008.

“We are going to be working with the Afghan National Army and the Afghan National Police and helping them to develop their ability to provide security to their citizens and that’s a very difficult job because many Afghans are living day to day, ” Staton said.  “And security for a population is a very difficult concept for a population when you’re trying to live day to day and survive.”

Staton describes Afghanistan as a “very poor” country. “It’s a country that’s been rife with conflict for 30 to 40 years,” Staton said. “The Afghan people, they get what they get mostly from other people. They don’t produce a lot of their own products.  You know, they grow their own food, obviously, but they import an awful lot and almost anything of value that they have has been given to them from someone else.  I would say that Afghanistan is almost like a huge welfare state. As far as do they want a central government, do they want a government like the United States, I can’t necessarily speak to that because I think that’s a personal decision.”

He’s warning his troops that communicating with their families back home may be hit or miss once they get to remote areas of Afghanistan.

“Afghanistan is a very austere environment and there are some…bases that are very mature and have very mature communications. There’s other command outposts, combat outposts that are very austere and have very limited communications opportunities,” Staton said.  “…I think we’re going to run the range of some soldiers being able to talk almost at will with their family members either by email or telephone and some soldiers that will only be able to get a weekly telephone or email call in.”

Melissa Iseminger of Newton is a family readiness coordinator, so she’s helping other families in her husband’s unit.  But she’s also preparing her own family because her husband, David, may be among those deployed to Afghanistan.

“I’m trying to stay positive for the kids and just waiting to see how the alert’s going to fall out for us,” she says.

The Iseminger’s have three children and they’ve seen their father deployed to Iraq and sent to training camp before.  “They understand that he’s going to go away again. We don’t try to elaborate on it too much right now because it is only an alert.  We don’t want to tell them too much information,” she says.  “They’re very knowledgeable. They’re 12, 8 and 6…so now they know a lot more information about the war and what’s going on over there with all the media.”

Iseminger was able to talk with her husband frequently when he was stationed in Iraq.  That may not be the case when he’s in Afghanistan.

“For me, emotionally, that will be the hardest thing I will have to go through,” Iseminger says.  “The two years that he was gone (in Iraq) I had communications with him almost daily.  I never had to go very much more than a week, so that will be my hard part this time. He’s already prepared me that capability is not available over there.”

The 34th Infantry Division of the Iowa National Guard has been mobilized for every international conflict since World War I.  Guard units from 34 different Iowa cities are part of this latest deployment notice. Lieutenant Colonel John Cunningham, one of the battalion commanders, has been talking with soldiers in his unit by phone.

“We don’t know where we’re going to train.  We don’t know our specific mission,” Cunningham says.  “Don’t quit your jobs. Don’t drop out of school and we, as a battalion, are going to continue to train them and prepare them for this potential mission.”

Dick Rue, chairman of the Iowa Committee for Employer Support for the Guard and Reserve, says three full-time workers and 150 volunteers throughout the state will help any of the 3900 soldiers who think they may be laid off because they’re being called up.

“If a soldier has an issue with regard to an employer I would advise them not to quit, not to get angry, to call us, call our office and we will deploy one of our ombudsman to speak with them and address it with the employer,” Rue says.  “Firing an employee who is a military member in anticipation of deployment is a violation of the USERRA law.”

President Obama is weighing a decision on whether to send more troops to Afghanistan just as the war there appears to be heating up.  Orr — the adjutant general of the Iowa National Guard — told reporters earlier this afternoon that the Iowa Guard soldiers will prepare for Afghanistan the same way they’ve prepared for other operations.

“The protective measures that we take, the equipment — it’s much better today than it was at the beginning of the war, but for training purposes, we do learn lessons over time as an Army and we will apply those as they move to the mobilization station, but we don’t necessarily change our tactics and techniques in the training proceedures just because it’s Iraq or Afghanistan,” Orr said.  “We have a baseline soldier skill set that has to be taught and certified, and I’m responsible to certify for the brigade that they’re trained and ready to go to combat.”

See a map of the various units that will be deployed here: ING Alert map PDF