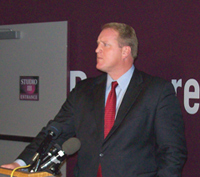 Earlier this month Culver ordered an across-the-board cut in the executive branch of state government.  The governor’s aides plan to release details of those proposed cuts on-line by midday today. The governor expects the plans for layoffs and other budget-cutting moves to be finalized by the end of the month.

“We’re going to roll up our sleeves and sign off on these plans as quickly as we can so we can get this budget balanced,” Culver said yesterday in Mason City.  “…Over the next week to 10 days I’ll work with our department directors to sign off on the final plan and then we’ll move forward with things like layoff notices after that.”

Yesterday afternoon, Culver road a train from Nevada to Manly, visiting a center where wind turbine components are shipped via rail.  When questioned by reporters during a stop in Mason City, Culver dismissed the idea he’d been “joyriding” while his staff was back in Des Moines poured over budget documents.

“(I’m) looking forward to being very engaged throughout the process here to work with the department directors to figure out how we can maintain essential services to the most vulnerable Iowans — our senior citizens, some veterans, kids,” Culver said.  “…We want to try to minimize the impact, although the effect of the cuts will be felt across the state.”

During the train stop in Mason City, Culver said he was there to talk about “some positive things that are happening” on the rail line that stretches from Nevada through Mason City and on to Manly.

“We hope to be able to do with Union Pacific a $23 million improvement to this rail line here. I mean this is a vital link in terms of the Manly terminal all the way down to the Gulf of Mexico,” Culver said.  “It’s a great way for Iowa to continue to lead the way when it comes to renewable energy, to move those towers and turbines and blades.”

The Iowa Northern Railway’s terminal in Manly not only ships wind turbine components, it has the capacity to ship millions of gallons of ethanol.