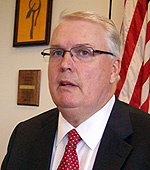 Nursing homes, doctors and other health care providers in Iowa will likely see a five percent reduction in state payments for the care they give poor and disabled Iowans enrolled in the government’s Medicaid program.

That is among the budget-cutting ideas Department of Human Services director Charles Krogmeier delivered to the governor this week.  Krogmeier says there is “some” concern that some health care providers would choose to quit providing care for Medicaid patients.

“Some providers rely on Medicaid for a good share of their revenue,” Krogmeier says.  “Others, it’s a relatively small piece, so depending upon their revenue mix and the kind of programs that they’re getting paid for from Medicaid, you know, it’ll impact each one differently.”

Krogmeier and his staff reviewed the various medical services which qualify for Medicaid coverage, too, and have decided to discontinue covering visits to the chiropractor.

“Medicaid, at the federal level, requires states to provide certain services and then there’s a list of optional services: chiropractic, podiatry — there are others that are optional and we looked at those,” Krogmeier says. “I’m not happy about cutting chiropractic.  I’m sure that people who rely on those services are not going to be happy, but that was the choice, the recommendation that we made.”

The changes in the Medicaid program would become effective December 1st, pending approval from the federal government and state legislators.

Krogmeier’s Department of Human Services is the largest agency in the executive branch of state government.  He has proposed that 79 D.H.S. workers be laid off and another 149 unfilled jobs in the agency would be eliminated.  The department will close its child support call center in Marshalltown, putting about 50 people out of work.

“In the child support collection area, I think payments will still get processed quickly,” Krogmeier says. “But by closing that call center, it will take longer for people to get somebody to call them back to help them with a question — those kinds of things.”

Krogmeier says in the past couple of weeks 250 Department of Human Services employees submitted budget-cutting ideas to him. “And they were pretty uniformly constructive and positive,” Krogmeier says.  “…Nobody is happy, obviously, about this, but it’s been fairly constructive and I think they are understanding of the situation we are in.”

Krogmeier says many Iowans will feel the pinch of these budget cuts.  For example, payments to foster care parents and a subsidy for parents who adopt a child will be cut by five percent.