Jason Meyer is a junior at Olin Consolidated School. He was nominated by Brenda Farrington who says: 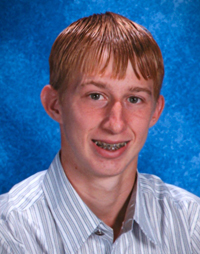 When the flood devastated our town, Jason and his entire family were the first to volunteer to fill sandbags and save other homes from the water. Jason worked tirelessly for many hours non-stop. Jason also unanimously gave half of his birthday money to the local food pantry to help others in need. How many high school students would do this?

Jason is on his school’s football, basketball and baseball teams. Jason has participated in Drama, Band and Choir and is on the honor roll. Jason is also involved with Student Council and is active in Red Ribbon week and LRP. Jason is currently taking Kirkwood classes along with his regular academic classes.

Jason is aspires to become a plastic surgeon to help those with severe disfigurements. Jason and his family put on an annual Halloween Haunted House for the children of the community. This allows the children to be safe and have some fun. Jason puts in many hours and lots of work to set up, participate and tear down within twenty-four hours.

Jason Meyer is an all around INS Superior Student.”