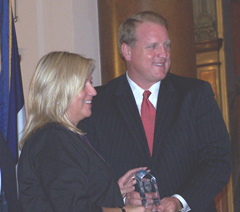 Governor Chet Culver says meetings continue on the details of 10% budget cut and will likely release more details later this week on its impact on the state workforce.

The governor was asked about the issue today at an awards ceremony for state employees. The governor says they are working through the process and will likely hold a news conference Wednesday.

Culver says he has “important meetings’ today with department directors and will meet tomorrow with labor union officials.

Culver was asked about the possibility of re-opening negotiations on the state union contract to help minimize the layoffs. Culver says they will look at all options on the table. “I think the most important thing is for everyone to realize, all state employees, what 10% really means in terms of reduction,” Culver says, “now that that is becoming more and more clear, we’ll look at every tool that we have in order to minimize layoffs.”

Culver declined to comment more on the potential for new union contract negotiations. “Out of deference to them and their members, I’ll wait to comment more on that,” Culver says. He says he will have an “important” meeting Tuesday with members of AFSCME, the largest state union, and three other unions.

The board that governs the three state universities will discuss a six-percent tuition increase at their meeting Thursday to help make up the budget cuts. Culver says he has concerns about the tuition increase. Culver says it’s not something the Board of Regents has publicly discussed yet, and the governor says he expects a lot of “divergent views” on the increase. He says the regents are like the executive branch and will have to go through a difficult process and put all options on the table.

One of the options includes a $100 surcharge on students for the spring semester. Culver says he has concerns about the surcharge. “I think we have to be careful not to try to raise tuition and fees on students during this budget cutting process,” Culver says, “I understand that there might require some of that, but I think it’s important that we strike the right balance, and that’s what I’ll be conveying to president (David) Miles of the Board of Regents.”

Culver said today the leaders of the Iowa Lottery and Iowa National Guard have voluntarily agreed to cut their pay. Culver says there was some initial “miscommunication” and issues of retirement pay that were addressed and the two have agreed to cut their salaries.