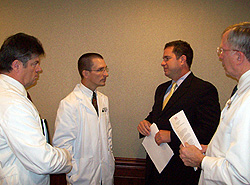 “The federal Medicare program is an incredibly important part of the fabric of Iowa’s health care infrastructure.  More than half a million Iowans call Medicare their insurance company,” says Dr. Michale Kitchell, president of the Iowa Medical Society.  “That ranks us fifth in the nation in percentage of our population insured by Medicare.”

But Kitchell says for the last 17 years, Iowa hospitals and doctors have been paid less than their counterparts in urban areas because of a Medicare payment formula that discriminates against sparsely populated states like Iowa.

The three Democrats who serve in Congress last week announced they’ve struck a deal on the health care reform package that would include a change the Medicare payment system so that doctors, hospitals and other health care providers would be paid based on the “quality” of care, rather than the “quantity” of tests and medical services provided.  Kitchell says that deal will help Iowa physicians by rewarding higher quality and more efficient care.

“The current system of reimbursement has led to inexplicable variation in utilization across the country,” Kitchell says. “That variation may have contributed to the health care inflation that has crippled many businesses and led to calls for fundamental reform of our system.”

Kitchell and other leaders of the Iowa Medical Society met this morning with Congressman Bruce Braley, a Democrat from Waterloo, to talk about the Medicare reimbursement changes Braley has been pushing.  Braley said a coalition of congressmen from the Midwest and the northwest U.S. have secured the deal which calls for Medicare payment system changes.

“What Iowa physicians and Oregon physicians do well is emphasize the quality of a patient’s final two years and making sure that they get the type of care that gives them and their families the best opportunity to have the best possible experience,” Braley said, “rather than subjecting them to a lot of unnecessary tests which is what we see in other parts of the country.”