You are here: Home / Sports / Ferentz not interested in BCS standings talk, focused on Northwestern 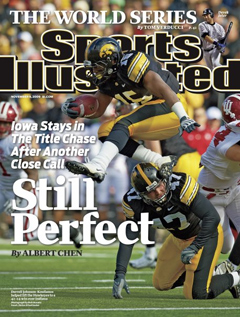 Iowa coach Kirk Ferentz says he will not lobby to improve the Hawkeyes standing in the B-C-S. Iowa is 9-0 on the season but the Hawkeyes are losing the national debate and stand a very good chance of being left out of the national championship game even if they run the table.

Ferentz says he doesn’t look at those things and says he assumes they are in the mix, but says they still have three conference games left and that’s all they can worry about right now. Ferentz says the Hawks have done a good job all season of not looking ahead and there is no reason to start now.

Ferentz says they all realize they have three tough teams remaining and are not the type of team that goes and wows people. He says they just have to go out and find a way to win. Iowa hosts Northwestern this weekend and Ferentz says the Hawkeyes best trait is their ability to handle pressure.

He says to have a successful season, you are going to have tough moments where someone has to step up, and this year they’ve already had their share of great moments. Ferentz says when you don’t have those moments, you don’t win.