You are here: Home / Outdoors / Leaves vacuumed away in Cedar Rapids 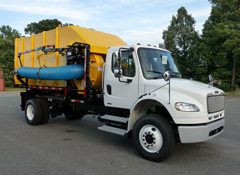 An official in Cedar Rapids is predicting other cities in the state will be following his city’s lead when it comes to leaf collection. Mark Jones is the Superintendent of the Cedar Rapids Solid Waste and Recycling Department.

“I suspect that we might be a trendsetter,” Jones said. Cedar Rapids is the only city in Iowa that uses vacuum trucks to suck up tons of leaves left by residents in their driveways or in their yards near the edge of the road.

The city spent $1.3 million this year to purchase 10 trucks that are equipped a vacuum arm manipulated by the driver via a joystick. Jones says the vacuum trucks are much more cost effective than the city’s previous method of leaf collection which involved front-end loaders, street sweepers, water trucks and dump trucks.

“So, if you think of a vacuum truck with a single operator that can haul in nine loads in a day versus all of those other pieces of equipment to get nine loads, there’s definitely going to be savings,” Jones said. The vacuum truck method is also considered safer because the leaves are no longer raked into the street. Cedar Rapids city officials agreed to purchase the trucks after visiting the equipment manufacturing site and a couple of communities in Wisconsin that utilize the trucks.

“We did a lot of leg work over about a two year period and settled on the leaf vacuum trucks,” Jones said. “I must admit myself – and I’ve had numerous compliments from other city staff and citizens alike – that it seems to be a great service we’re providing.” The vacuum trucks visit every Cedar Rapids home once a week. They’ve been running a bit behind schedule at times because heavy rains have been knocking more leaves than usual to the ground. Jones says damp leaves are actually easier to pick up and pack than dry leaves.

“The trucks, on a very dry day, may get anywhere from one-and-a-quarter to two-and-a-quarter tons (of leaves). On a wet day, we can have some load that are up to eight or nine tons per load,” Jones said. The new vacuum trucks are in their fifth week of service in Cedar Rapids. So far, they’ve collected over 2,000 tons of leaves that are delivered to a compost site in Linn County. Cedar Rapids’ loose leaf collection service is scheduled to run through December 11.