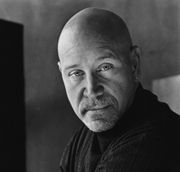 A computer programmer who wrote creative fiction in his spare time is now a best-selling novelist and he’ll appear at an Iowa City book store tonight. David Wroblewski wrote the book “The Story of Edgar Sawtelle.” It was the most successful debut novel of 2008 and spent 39 weeks on the New York Times best-seller list. Wroblewski says the tale is set on a small farm in northern Wisconsin.

“The main character is named Edgar. He’s a 14-year-old boy and he’s mute but not deaf,” Wroblewski says. “His family has, for three generations, been raising and training a fictional breed of dog, called Sawtelle dogs. So that’s the setting for the story and, of course, it’s a story of family conflict.”

While his first attempt at a novel is already in its ninth printing, Wroblewski says he feels he’s under no pressure to write another book. He says he enjoys writing and has already started on his second novel, but says it may take him four or five years before it’s ready to publish.

“It involves one of the characters who’s peripheral to Edgar’s story,” Wroblewski says. “I think of Edgar’s story as a sort of portrait of a person. This book is also a portrait of a person.” His debut novel was picked for the Oprah Book Club, which is a dream for many aspiring authors as the T.V. host’s stamp of approval virtually guarantees a book’s success. Wroblewski remembers well the day he found out he’d be joining the elite list.

“I’d heard a rumor earlier that day that I should stay near my phone,” Wroblewski says. “There was no more advance warning than that. It was a surprise to me. I think it was a surprise to everyone connected to the book. There was a day when I got a phone call and it was Oprah Winfrey on the line saying ‘I’m enthusiastic about your book and I’d like it to be part of the book club.'”

The 50-year-old Wroblewski is a Wisconsin native and now lives near Denver, Colorado. Wroblewski is scheduled to appear at 7 o’clock tonight at Prairie Lights in Iowa City, his only Iowa appearance.