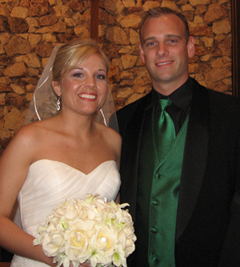 Congressman Steve King missed his son’s wedding this past Saturday as King stayed in Washington for the debate over health care reform. King was among the Republican members of congress who cast a “no” vote late Saturday night.

“I thought it through and could only come to one conclusion, that I  cannot ask other people to sacrifice, I can’t ask soldiers to go to Iraq or Afhganistan, or people to step forward and do the work that’s needed for this country if I’m not willing to sacrifice, too,” King says.

King says it wasn’t difficult to make that decision, but he says it was hard to miss the family celebration. “I’m home now and I had a chance to actually catch them on the way to the airport and have dinner with Mr. and Mrs. Michael King and it was a very, very good feeling to be able to send them off into their lives together,” King says.

Tennesee Congressman Marsha Blackburn learned King was missing the family wedding, so she got a bound copy of the health care reform bill and had the Republican members of congress sign it and extend their handwritten congratulations to King’s son and his new wife.

“It turns it into the best wedding card anybody ever had gotten. It will be an heirloom that Mick and Steph will have the rest of their lives and I expect they’ll pass it along to their children,” King says.

King is a keeper of family heirlooms.  The leather-bound copy of the New Testament that one of King’s distant uncles carried in the Civil War is on display in King’s D.C. office.