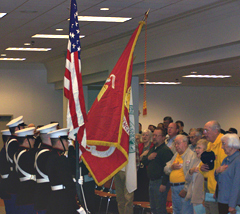 Veterans say the pledge of allegiance.

There was the traditional service music honoring veterans and Pat Palmershiem, the executive director of the Iowa Department of Veterans Affairs spoke about the sacrifice given by those who serve.

Palmershiem says well over half of all the veterans who have taken up arms for our country live among us today. He says the 25-million veterans from World War One to Iraqi Freedom paid a personal price for the freedom and security we all enjoy.

General Mark Corson commander of the Army Reserve 103rd Expeditionary Sustainment Command in Des Moines talked about the modern day military. Corson says the veterans of World War Two rightfully earned the label of “The Greatest Generation.” But he says those in the current generation too often mislabeled 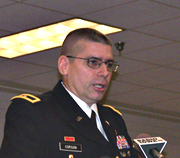 Corson says he so often hears that the modern generation is “the lamest bunch of slackers anyone has every seen. That all they want to do is to play their video games. That they are not studious and don’t study, and that they have the attention span of a tree frog.” Corson who is also a college professor, says that’s not what he’s seen when he talks to recruits.

Corson says he tells students that if they are just here to get their education paid for or the benefits and if they don’t understand it is likely they will deploy to hostile fire zone, then he will offer to give them a piece of candy off his table and invite them to leave and not to waste his time. He says they all say the benefits are nice, but say the are “here to serve.” Corson says this generation has answered the call to service and could be called the next “Greatest Generation.”

Corson says: “The pundits that said that…this state of persistent conflict would break the army, that recruiting would fail that this generation would not step up, they were wrong. In fact, all components of all services have completely met and exceeded their recruiting goals, and the military services at this point after eight years of continuous 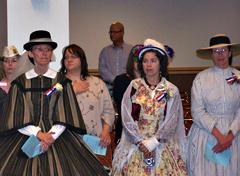 Corson says the current military is strong because of the veterans of the past. “The lineage that we trace back throughout our history, certainly to the Greatest Generation if not beyond. That lineage is the inspiration for this generation of our service members,” Corson says. Brigadier General Corson commands 300 soldiers in Iowa and has six-thousand additional soldiers in 100 units in Minnesota, South Dakota, Kansas and Missouri under his command.