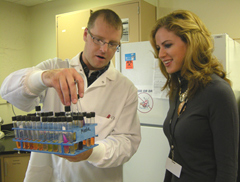 The Iowa City native who was crowned Miss Iowa in June has earned another title — ambassador. Anne Michael Langguth is being named as the Environmental and Public Health Laboratory Ambassador to the University Hygienic Laboratory.

The 22-year-old Langguth says she’s had a lifelong interest in science and hopes to bring awareness to a looming workforce shortage in the public health sector.

“Working with the hygienic laboratory is going to offer me the opportunity to share that interest in science with youth and with educators across our state,” Langguth says. “Teaming up with the outreach activities that the hygienic laboratory already participates in, I’ll be able to use my crown as a microphone, in a sense, to promote public health and what it means to be involved in a career in public health and options that students in our state have.”

Over the next decade, more than 4,200 public health jobs are expected to be left vacant in Iowa due to a shortage of skilled workers, according to a study by the Association of Schools of Public Health. Nationwide, she says it could be a quarter-million vacancies.

Langguth served as a 2005 World Food Prize intern, spending two months in China conducting research to pinpoint genes that produce stronger varieties of rice. “Oftentimes students think about becoming a doctor or becoming a nurse and forget about the incredible opportunities there are in laboratories, the incredible opportunities in terms of outreach activity, working in a public health lab,” she says. Langguth graduated from Harvard University earlier this year and plans to start medical school at the U-of-I in 2010 after her reign is complete as Miss Iowa.