You are here: Home / Human Interest / Son of Beatle McCartney to make U.S. debut in Iowa 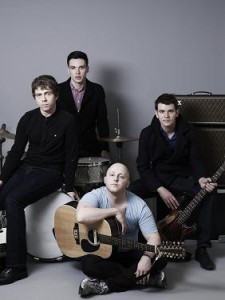 The son of legendary musician and ex-Beatle Paul McCartney will make his American concert debut this weekend in southeast Iowa. Thirty-two-year-old James McCartney is performing with his band as part of a concert series in Fairfield.

One of the show’s organizers, Michael Sternfeld, heard the younger McCartney play at an impromptu house concert in Fairfield this summer. “I got a call saying, ‘Michael, c’mon over to the house, something special,’ this is by Bob Roth, vice president of the David Lynch Foundation, and there’s James McCartney, sitting on the couch with his guitar in hand, and for just four of us, he just played for two hours,” Sternfeld says. “Absolutely incredible, he’s so gifted. He’s a musical genius, I think.”

Officials from the Lynch Foundation, headed by the film director, became acquainted with James McCartney after his father played a benefit concert in New York in April. Sternfeld says the younger McCartney was curious about Fairfield and its links to Maharishi Mahesh Yogi and transcendental meditation so he made the trip to Iowa — and put on the mini-concert.

So how’s he sound? “Very distinctive voice, he has his own voice, plays a lot of different styles and genres, from his own original material to beautiful covers,” Sternfeld says. “In the past, as I understand it, he has a band named Light and he’s been performing in London clubs under that band’s name. Not only is this his U-S debut, this is really his debut under his own name as James McCartney.”

McCartney is granting no interviews, but said through a press release that his music is “basically rock ‘n’ roll” that was inspired by The Beatles, Nirvana, The Cure, P-J Harvey, Radiohead “and all good music.” Sternfeld says it’s a real honor for Fairfield to be hosting this show, adding, the audience will not be disappointed. “I was deeply moved, I was touched, I was enchanted by his music,” Sternfeld says. “It is very distinctive, unique, powerful. He sings from a very deep place. I feel he has a huge future as a musician in his own right, even if he didn’t have McCartney as his last name.”

The concert comes a little more than 40 years after Paul McCartney traveled to India to study Transcendental Meditation with Maharishi Mahesh Yogi. Fairfield is home to Maharishi University of Management, which was founded about the same time. Among the other performers at the Saturday concert is Donovan, the 60s Scottish singer/songwriter who was an influence for the Beatles.

For more information on the concert, visit: www.fairfieldacc.com for the Fairfield Arts and Convention Center.