You are here: Home / Politics / Govt / Branstad learned lesson in return to campaign 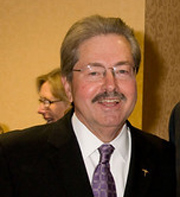 Former Governor Terry Branstad says he’s “learned a valuable lesson” in the opening weeks of his campaign for a fifth term in office.

On Saturday, November 7, Branstad made his debut on stage with the five other candidates who’re seeking the Republican Party’s 2010 gubernatorial nomination.  It did not go well.

During a wide-ranging, 40-minute-long interview with Radio Iowa on Wednesday afternoon, Branstad acknowledged that speech fell a bit flat.

“I read the speech because there were certain points that I wanted to make, but it was a mistake to read the speech.  I need to speak from the heart, just as we have here today. I think people see the passion and the commitment that I have, the sincerity, the experience and the knowledge that I have if I just speak from the heart, so I learned a valuable lesson from that one,” Branstad said, with a laugh. “And this is the way we’re going to do it as we go forward.”

Branstad served as president of Des Moines University for just over six years. He was Iowa’s governor for 16 years — during the Farm Crisis of the 1980s and the boom years of the 1990s.

“And I guess what I see now and what I’m really intrigued about and why I really want to be governor again is, you know, the Chinese have a symbol for crisis and opportunity — and it’s one and the same,” Branstad said.  “This financial crisis gives us the unique opportunity to change the size, scope, structure and delivery system of state and local government that you could never do in a good and prosperous time.”

Branstad isn’t talking specifics yet or endorsing controversial ideas like consolidating counties or schools. Branstad considers Iowans, in general, to be resistant to change.  But Branstad argues the size of city, county and state governments needs to shrink.

“Big things like this can only happen in (a) time of great economic turmoil and crisis,” Branstad said, “which we have right now.”

Last weekend one of Branstad’s rivals said road builders were telling him Branstad had promised to approve an increase in the gas tax if he’s elected.  During his interview with Radio Iowa, Branstad said that’s not true.

“I don’t think we need a gas tax increase and I wouldn’t support a gas tax increase,” Branstad said.  “In fact, I think what we need to do with the Department of Transportation — what we need to do with all state and local government — (is) look at how can we eliminate some of the administrative costs and some of the inefficiencies so more of the user fees, which is the gas tax (and) your vehicle registration, that that goes for what it’s supposed to go to: roads and bridges.”

The current state tax on a gallon of regular unleaded gasoline is 21 cents per gallon.  Gas with a 10 percent ethanol blend has a 19-cents-per gallon state tax.  I989 was the last time the gas tax was raised in Iowa.  Branstad was governor then and he approved changes in the formula which distributes gas tax money to state, city and county roads along with that increase in the gas tax.

In October, Branstad retired from his job as president of Des Moines University in order to seek a fifth term as governor.

Listen to Branstad talk about the lesson he learned: Branstad 1:55 MP3