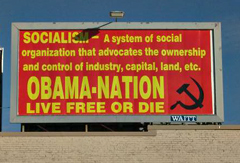 A billboard in downtown Mason City is sparking conversations. It features a definition of socialism, along with the phrase “Obama-Nation — Live Free or Die” and the Communist symbol of a hammer and sickle.

Mark Tlusty of Rockford is spokesman for Concerned Citizens, the group that paid around $400 to display the sign for a month. Tlusty says the billboard idea stems from a “TEA Party” rally held in Mason City back in April.

He says: “There was a bunch of us that got together and same thing, freedom of speech. We considered ourselves concerned citizens of America. We didn’t care if we were Democrat, Republican, conservatives or left. It didn’t matter. If you were deeply concerned in the way your country’s running, you should be involved in this.” Tlusty says many people have expressed displeasure with the billboard, but he says plenty of people like it, too.

He says he takes the country to heart and is sorry that some people are belittling him and taking the billboard personally. Tlusty says his own character has been called into question by some of the opponents of the sign. “I’ve had people call me a racist (claiming) the only reason I’m doing this is because the president’s black,” Tlusty says. “I could care less if he’s purple. His issues are what’s at hand, not the color of him. When people do that to me, they’re grasping at straws and playing the race card.”

Tlusty says he’s had more response to the sign that he originally anticipated. He says for every one bad phone call, he’s getting about five to ten good ones, and he hopes people who are against the sign look more closely at what his group is doing. The billboard is located in the 600-block of South Federal, between the intersections of State Highway 122 and U.S. Highway 65.