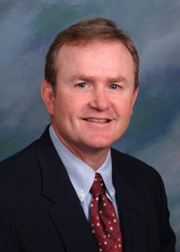 A former Iowa State University wrestling coach intends to run for congress. Jim Gibbons retired from coaching after the 1992 season to work as a financial advisor. He’s leaving that job to run for Iowa’s third district congressional seat.

“I got contacted by a friend of mine who’s in congress right now and in the middle of July he asked me if I had ever considered running for congress and I said, ‘Every day,'” Gibbons says.

“I believe that what we’re going through right now is unsustainable and the amount of government spending that we’re doing right now, it’s going to effect our children and it’s even, with the lack of money there, it’s just basically (pitting) groups…against each other.”

Gibbons is an Ames, Iowa, native who lives in Des Moines now.  Gibbons says he’s been a supporter of Republican candidates over the years.  Now that he’s a candidate himself, Gibbons says he’s approaching the campaign like a coach would, by stressing the fundamentals.

“I’m not alone here and I’m very deeply concerned about the level of government spending and just the solutions that (Democrats) are putting in place here just automatically default to spending more money,” Gibbons says.

Democrat Leonard Boswell of Des Moines currently holds the third district congressional seat and has indicated he plans to seek reelection in 2010.  Gibbons is critical of Boswell’s “yes” votes on the federal stimulus, the “cap and trade” energy bill and the health care bill.

“Government solutions are really not the answer,” Gibbons says.  “Leonard’s voted for all three of those things and I just don’t think that in the state right now that we’re in right now we have to go ahead and spend as much government money as we are.”

Gibbons will face Dave Funk of Runnells, a retired pilot, in next June’s Republican Primary for the chance to run against Boswell in the General Election.

Gibbons won three state wrestling titles in high school. He went to college at Iowa State, where he was an All-American wrestler and the winner of a national championship during his junior year. After college, Gibbons became an assistant wrestling coach at I-S-U.  Long-time Cyclone coach Harold Nichols retired in 1986 and Gibbons took over the program when he was just 26 years old. Gibbons retired from coaching after the 1992 season to work as a financial advisor in central Iowa, although Gibbons is often seen as a commentator in wrestling broadcasts.