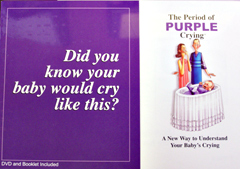 The new program includes an educational booklet and DVD. Scott says the program allows parents of newborns in hospitals will receive the information and have a resource when they go home. He says they hope to decrease the number of shaken baby deaths by helping parents reduce stress and helping them “avoid this kind of harm.”

The information is going out to hospitals in 12 central Iowa counties. Denise Easley is a nurse in Cedar Rapids who has used the program.

“It’s easy to understand, it’s at a third grade level, it comes in many languages, and it’s also closed captioned, so it targets everybody,” Easley says. Easley says giving the information in a hospital lends more credence to the program. She says the information is evidence based, and is shown to parents in the hospital before the babies are released. Easley says they encourage the parents to show the information to families and babysitters too.

Easley says crying is one thing that can trigger problems and the program explains what is happening with a baby. Easley says they want everybody to know that crying is normal and babies will have a period of crying that is normal and will increase when they are about two weeks old and continue for about two months. She says it’s important for people to understand the importance of crying and what’s normal for crying to help prevent shaken baby syndrome.

The Iowa Department of Public Health is partnering with Prevent Child Abuse Iowa and the hospitals in the program. Easley says it is an important step in trying to prevent deaths. “The way I feel, is if just one baby is prevented from being shaken, the it is worth it,” Easley says. She says Iowa has 40,000 babies born every year, and the cost of the videos is only two dollars each, so it would cost onLY $80,000 for every parent to see the video.

Easley says the cost to care for a baby who suffers from Shaken Baby Syndrome could exceed one million dollars. The central Iowa counties that are a part of the program are: Carroll, Boone, Story, Audubon, Guthrie, Dallas, Polk, Jasper, Adair, Madison, Warren and Marion. Iowa is the fifth state in the nation to use this program as its statewide model.