You are here: Home / Politics / Govt / Judge says she’s not been asked to be Culver’s 2010 running mate 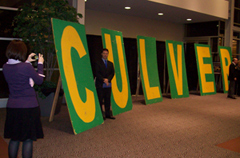 Lieutenant Governor Patty Judge says Governor Chet Culver hasn’t asked her to be his running mate in 2010. Judge, a candidate for governor in 2006, quit her own campaign in the spring of 2006 when Culver asked her to be his lieutenant governor. This past weekend, Judge spoke at the Iowa Democratic Party’s Jefferson-Jackson Day Dinner.

“People keep…asking me, ‘Are you running with Chet again?’ Well, that’s Chet’s choice,” Judge told the crowd.  “But I will tell  you that if he wants me on the ticket for another four years, I’m going to be there.”

Judge spoke for over nine minutes at the party’s annual fundraiser, offering up a defense of Culver’s three years in office. “A solid record of accomplishments in the first term, a vision for moving Iowa forward through job growth, through quality education, affordable health care and renewable energy opportunities,” Judge said, “a man of leadership, a man of unquestionable integrity.”

“One of the first chapters in my book will be entitled, ‘My Early Years, The Branstad Era’ or we can title that ‘Terry Loves Tax Breaks for the Rich and Terry Loves Taxes for the Rest of Us,'” Judge said.  “Or we can call it what people from all over the state where calling it at the time which was, ‘Holy Moly! We’ve got to get the guy out of here — the place is falling apart.'”

Former Governor Terry Branstad, a Republican, is seeking a fifth term as governor in 2010.  Judge, a Democrat who was a state senator during part of Branstad’s tenure as governor, served as state ag secretary for eight years before becoming lieutenant governor in January of 2007.

“I am proud of these chapters in the Culver-Judge years and I know you’re proud of them, too,” Judge said to the crowd of about 15-hundred on Saturday night.

While Judge says she’s not been asked to be Culver’s running mate next year, the governor’s campaign website — www.chetculver.com — includes Judge’s name on the logo.