You are here: Home / Outdoors / Trapping remains popular in Iowa 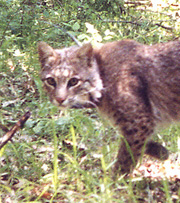 Trapping is still a popular outdoor sport in Iowa, compared to neighboring states. State officials say about 1,500 Iowans hold licenses to capture “furbearing” animals like bobcats and otters. Ron Andrews of the Iowa Department of Natural Resources says there are half that many trappers in Minnesota and Wisconsin.

“Generally, there’s a nice distribution of fur harvesters statewide,” Andrews says. The current hunting season for bobcats and river otters is nearing an end. So far, Iowa hunters have trapped or shot 132 bobcats. “This is actually the third year of the bobcat harvest season,” Andrews says. Bobcat hunting is allowed in the two tiers of Iowa counties which border Missouri, as well as in the counties in western Iowa which border the Missouri River.

A license-holder may “harvest” just one bobcat. Andrews says the bobcat’s fur isn’t as valuable as it once was. “Right now the fur market on most pelts is pretty sluggish, I guess, like the general economy I would say and consequently the value on any of the pelts is down substantially,” Andrews says.

“It does fluctuate from year to year, depending on the fashion trend in the European markets. They’re the ones that turn these pelts into various fashions and they kind of end up sort of dictating what the market will be by the trends and by what people like to wear.” State officials set a “quota” of 200 bobcats, so when hunters report they’ve caught 200 bobcats, the season will be suspended.

The hunting season for river otters is nearly over, too. The state quota for otters is 500, and by mid-Friday hunters had captured about 300.