You are here: Home / Business / Update: Film credit program back for those already in pipeline 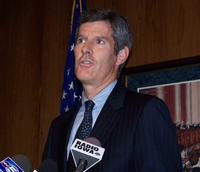 Iowa’s attorney general announced this afternoon the suspension of the state tax credit program for filmmakers has been lifted. Governor Chet Culver suspended the program in September after several questions came up about how the money was being spent.

A-G Tom Miller says about $9-million  of the $32-million for 22 approved projects had been paid out and they will now review the other $23-million in projects.

But, he says no new applications will be registered until lawmakers take another look at the program. He says this will allow them to see what happens with the projects that are being processed, and also give the legislature a chance to review the program to see where they want to go.

The governor has been under fire for the lack of oversight for the Iowa Film Office, while those in the industry who had been promised the tax breaks were upset the program had been frozen. Miller says that did not play into the decision on lifting the freeze on the program.

Miller says, “I didn’t feel a lot of political pressure to go one way or the other on this. You know I felt a lot pressure to try and to the right thing, there’s an enormous amount of money involved here, were in a bad fiscal situation,” Miller says. He says he felt pressure to make the program work so it would be fair to everyone. A judge ordered the state to pay six-and-a-half million dollars to a Canadian filmmaker in a lawsuit over the frozen credits. Miller says that suit was also not a big factor in the decision to restart the program.

Miller says the lawsuit did have something to do with the decision, but he says the state still feels its arguments were stronger and the case is not over. “We thought that given that decision and given other considerations of what’s fair and what makes sense both for the industry and for the taxpayer, this made sense for us,” Miller says.

Miller says the Iowa Division of Criminal Investigation continues to investigate the issue and whether any charges should be filed. Vehicles allegedly purchased using the tax credits, including a luxury S.U.V., raised the initial alarm about the program. Miller says it was obviously one of the items that was not properly checked out before the credit was issued, but he is not sure if the state will get that money back.

Miller says it’s not known whether the state can get the vehicle back, or the underlying tax credits that were used to purchase it. “On the other hand, you know life has its ironies. In a way we can say thank God for those two vehicles, because those two vehicles really started the concern about it (the tax credit program),” Miller says. The former manager of the Iowa Film Office, Tom Wheeler was fired in September in the wake of the scandal, while Department of Economic Development director, Mike Tramontina,,and his deputy both resigned.

The interim director of the D-E-D, Fred Hubble, joined Miller for the announcement and said the lack of oversight of the film office was one of the major problems. Hubble says there a lot of things going on at the time, including the flooding in the state in June and July at the same time that the number of movies spiked up for the film office and there were a lot of things going on in the economic development department. He says they went from having 50 movies to 150 that were ready to go in Iowa. And Hubble says there was not a clear understanding of how to administer the program.

Hubble says they did not have a very proper interpretation of the law, and he says that is evident by the marketing materials that were used by the film office. He says they now have a clear interpretation from the Attorney General’s office and how the requests by the film companies should be analyzed. Hubble says the legal and financial areas of the D-E-D had not been involved in the film tax credit process when the new program started, but they are now.

Hubble says they will continue to be involved like they are with all other issues until everything with the film clients has been resolved. He says they will also have the A-G’s office and Department of Revenue working with them on all contracts and certificates. Attorney General Miller says there are 105 companies that sent letters inquiring about the film tax credit program, but they will not get contracts until the legislature decides how to proceed.

While Miller wouldn’t say when he thought a decision would be made on charges in the case, he says there were several things the state has found that were inappropriate in how the credits were used. He says there was shoddy documentation of the qualified expenses, misapplication of the credit which should have been 25% of the expenses made in Iowa, wrongful pass through corporations designed to look like Iowa companies, and the inappropriate expenses such as the vehicles.

Governor Culver issued this statement following Miller’s announcement:
“The Attorney General has determined that the state is legally obligated to move forward with existing contracts and approved applications. However, no new applications for film tax credits will be accepted until the program is reviewed by the legislature. At my direction, Department of Economic Development Director Fred Hubbell will work with the Attorney General, Department of Revenue and the State Auditor to ensure there will be extensive fiscal and legal oversight of the program. The days of out of state companies fleecing Iowans are over, and by halting the film tax credit program, I protected Iowa’s taxpayers.”