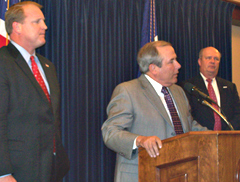 Governor Chet Culver is praising members of two state employee unions who have voted to forego some of their pay and benefits in order to avoid layoffs.

Members of AFSCME Council 61 and the State Police Officers Council have accepted a deal that will see many executive branch workers take five unpaid days off and give up a portion of the state’s contribution to their retirement funds.

“This is a big step today in terms of this agreement with the unions,” Culver said this afternoon at a news conference in his office.

“That is a major victory for the people of Iowa and for the taxpayers of Iowa because we’re still cutting 10 percent,” Culver said.  “We’ll still reduce our overall budget by $565 million.”

State agency managers proposed laying off almost 800 workers in October after the governor ordered a 10 percent, across-the-board cut in the executive branch.  Because the two unions agreed to pay and benefit reductions, the number of layoffs in the executive branch has been pared down to 109 according to the governor.  Department of Corrections director John Baldwin was facing the prospect of laying off more than 500 workers in the state’s prison system and he’s expressing relief that union members accepted the deal.

“Clearly we were very, very pleased that the rank and file recognizes the importance of staff being at our districts and at our institutions,” he said at this afternoon’s news conference.  “We obviously operate 24 hours a day, seven days a week and it’s crucial that we have enough staff to respond at any one time to any particular circumstance.”

Public Safety Commissioner Gene Meyer said there would have been fewer troopers to patrol the highways and fewer agents to monitor gambling at the state’s casinos if the unions hadn’t take this step.

In late October, state agency directors proposed that 791 state worker be laid off and another 529 unfilled jobs in state government be eliminated.  The union which represents social workers did not accept the pay and benefit concessions.  It means there will be layoffs of union members who are social workers, primarily in the Department of Human Services.