A small band of fans plans to camp out all night in Sioux City so they can be first in line Sunday to get Sarah Palin’s autograph [photos].  The former Alaska governor is due at the Barnes and Noble in Sioux City at noon tomorrow Sunday to sign copies of her memoir, “Going Rogue.” Two woman from Moville, Iowa — not far from the store — drove into the store’s parking lot at about three Saturday afternoon. Cindy Rilling brought “sub-zero” sleeping bags, camping gear and a propane heater.

Rilling is a huge Palin fan. 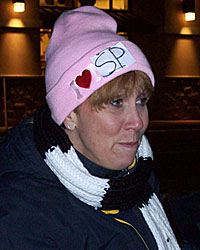 “She is me — everything that she stands for. Standing up, being honest, no matter what anyone else thinks. I admire that. I always say, ‘When I grow up, I want to be like Sarah Palin,’” Rilling said, with a laugh. “Plus, we’re setting a really good example for our kids. We did not force them out tonight.  They said, ‘Oh, you guys are going?  We want to go,’ so they are as nutty as their mothers.”

Rilling’s 14-year-old son, Schuyler, and his classmate, 13-year-old Daylon Stapp, put on five layers of clothes and crawled into a tent at about 10 o’clock Saturday night.  Leisa Stapp of Moville, Daylon’s mother, hopes Palin runs for president in 2012.

“(Sarah Palin) represents a movement,” she said, calling Palin “a grassroots, good conservative and she also represents to me going against a government that no longer represents its people…She is standing up and she’s representing people whose voices have not been heard for a decade or more.”

The two women and their sons were not the first in line, however. That distinction was earned by 22-year-old Todd Sargeant of Lebanon, Ohio.

“I missed her in Cincinnati and this was the closest spot I could come to meet her,” Sargeant said Saturday night.  “I think she’s an inspiration to so many people and it’s just an honor to be here to get to meet her.”

By 10 o’clock, about a dozen people were huddled in the Barnes and Noble parking lot, chatting, eating or trying to sleep. Rebecca  McConnell of Independence, Missouri, was huddled inside two sleeping bags.

“We came because we wanted to see Sarah,” McConnell said.  “It’s probably the closest we’ll get to come and tell her how much we appreciate her.”

McConnell had plenty of provisions for the wait.

“We brought water and pop and a loaf of bread and meat and peanut butter and hot chocolate and coffee,” she said. “…But most importantly doubled-up sleeping bags and triple layers, quadruple layers…and chocolate!”

At 10 o’clock on Saturday night, a local TV station reported the air temperature in Sioux City was 20 degrees, but with the wind that was blowing in the area, it felt like nine degrees.