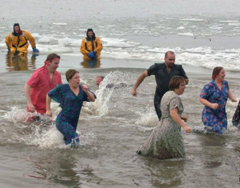 Despite freezing temperatures, some 325 people jumped into Clear Lake on Sunday to raise nearly $20,000 for the Make-A-Wish Foundation and Toys for Tots. Among those taking part in the 12th annual Polar Bear Club Swim, Ryan Cook of Nora Springs said it was his fourth time to jump in the icy lake.

“It’s a big shock, but it’s worth it,” Cook says. “It’s not as bad as you think it would be but it’s still pretty bad, but it’s a lot of fun.” Sisters Amber and Renae Greiman of Garner took the plunge for the first time. Amber says their trip into the lake was delayed but well worth it, especially for the dip in the hot tub after going into the frigid waters.

A lady lost her glasses right before they were going to take the leap so they were anticipating going in but then had to hold back. She says the hot tub felt incredible after the chilly plunge. Amber and Renae describe what it was like going into Clear Lake in December.

They say your toes go numb as soon as you hit the sand and once you make it into the water, there’s no feeling below the knees at all.

Some 70 members of the Make-A-Wish team raised nearly five-thousand dollars to take the top honors in fundraising. Many people wore costumes, including about 24 members of the Formalities team who all donned prom dresses and white wedding gowns.