You are here: Home / Fires/Accidents/Disasters / Woman rescued after her car slides into Knoxville area pond 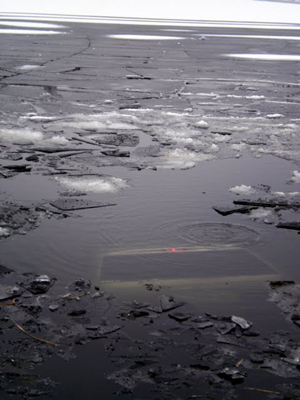 See an update to this story below.

There was a dramatic rescue in Marion County this morning just east of Knoxville. Marion County Sheriff Ron Goematt says a van with a female driver lost control at an intersection and slid into a pond.

According to the sheriff, a passing vehicle stopped and the as yet unidentified driver worked to free the woman from the vehicle.

Employees from the nearby Mid-American office saw the rescue begin and rushed to assist with ropes. The rescuer freed the woman from the vehicle by breaking a window with a tire iron. As soon as the woman was pulled from the car, it sank. Mid-American employees pulled the woman and her rescuer to shore with ropes.