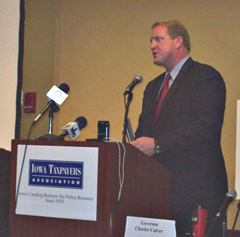 Governor Chet Culver today unveiled a list of 90 ideas he says will save the state nearly $1.7 billion over the next five years.

The ideas come from a consulting firm Culver hired to review the state budget. Culver will issue executive orders later this week to enact an estimated $128 million dollars in savings for the next budgeting year.

“I look forward to quickly signing these orders and implementing these reforms so that we can start saving taxpayer money,” Culver said this morning.

The rest of the proposals for the next state fiscal year require legislative action.

“I believe we can do all of these things if we have the political will to do ’em,” Culver said.

Consolidating the state’s 223 different data centers is one idea. Another calls for changing state purchasing methods to buy commonly used goods in bulk, including the medical devices used by Iowans who get state-paid insurance through Medicaid.

Culver, a Democrat who plans to seek reelection in 2010, unveiled the plans during a midday speech at the Iowa Taxpayers Association’s annual meeting.

“These changes will not be easy.  You can only imagine the buzz that this report has already created, but it will take the efforts of community and statewide leaders, like the people here in this room,” Culver said.  “I believe that we should all be partners in reforming our state govenrment, especially during these challenging economic times, and I’m counting on your support and your help and I believe the taxpayers of Iowa deserve it.”

The governor spoke with reporters early this afternoon, providing more details, such as an effort to encourage local officials to collect fines that are owed to the state.  Culver suggests the state may even hire private firms to go after delinquent taxpayers and those who have past-due fines.

“And there have been examples that we can show where states or government localities have done that, so that’s an opportunity,” Culver said.

“From what I understand, a lot of the ideas were stuff we proposed last year,” Paulsen told reporters, shortly before he was to speak to the Iowa Taxpayers Association.  “…I think we could have done ’em last year, but I’m pleased that (Culver) is ready to start working on ’em now.”

A Democratic senator who is co-chair of a government reorganization task force said Culver’s list of budget-cutting ideas shows there’s “growing momentum for changing the way state government does business.”

A copy of the report is posted on the governor’s official website.

Click here to listen to Culver speak with reporters. capCulverAfterITA