You are here: Home / Weather / Winter storm expected to dump lots of snow on state 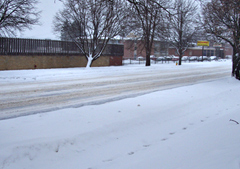 Dozens of schools are closed across Iowa as a major snowstorm blows across the state. Roger Valhollek, a meteorologist at the National Weather Service, says 92 of Iowa’s 99 counties are under a Winter Storm Warning, with nearly 60 counties in the state under a Blizzard Warning.

Valhollek says snowfall amounts should range from 12 to 16 inches. He says the blowing and drifting snow will present a serious challenge for motorists.

Valhollek says extremely strong winds will develop after midnight tonight, perhaps hitting 45 miles an hour or stronger, which would bring blizzard conditions. He says wind gusts may be well over 50 miles an hour overnight, but they should die down by Wednesday morning.

There will still be winds of 10 to 15 miles an hour tomorrow night, combined with regular air temperatures of perhaps five-degrees below zero, the wind chill levels could be very dangerous, perhaps hitting 15 to 20-below. High temperatures by the weekend should be in the lower 20s with no precipitation expected. For full details on the forecast, visit “weather.gov”.

The man who heads up the Iowa Department of Transportation’s winter weather operations says road conditions look to be at their worst on Wednesday. Dennis Burkheimer says the predictions for wind gusts of up to fifty miles an hour are a concern. He says,”One of the things that we see is going to be the biggest problem is tomorrow, on Wednesday as the winds start to blow and if the predications are correct as far as snowfall amounts today we should probably get anywhere from 10 to 14 inches or more in many parts of that state.”

Burkheimer says everyone appears to be looking at the same problems. Burkheimer says central and northeast Iowa will probably get the brunt of the storm, but he says it looks like most of the state is going to get blowing snow and drifting conditions. The one element that he says we’ll escape is ice.

Burkheimer says this looks to be only snow, but he says the cleanup will take some time because low temperatures don’t allow materials used to melt the snow work. Burkheimer says motorists need to be aware the driving conditions can change rapidly. He says it’s important that the people driving pay attention to the forecasts and road conditions and practice good winter driving skills. Burkheimer says rural two lane roads running east-west will be susceptible to snow drifts and that could cause closures.