You are here: Home / Fires/Accidents/Disasters / State reports some improvement in roadways 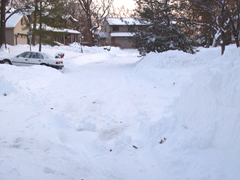 The Iowa Department of Transportation issued a news release at 4:30 this afternoon saying there are signs of improving road conditions, especially in the western half of the state. The D.O.T. says diminishing winds and brief glimpses of sunshine helped crews reopen many blocked roadways.

The tail end of the storm is now moving through the eastern part of the state and limited visibility and drifting snow can still be expected through the evening hours. Roadways are still likely to be partially or completely covered with snow or ice.

On Thursday, state road crews will focus on cleanup activities, including making sure that all lanes of traffic are restored, major drifts are cleared by large snow blowers and snow is removed from the shoulders. In addition, they will work to shave off any snow pack from the roadway surfaces. The goal is to restore roadways to normal winter driving conditions by Thursday evening, wherever possible.

Most cities in the state are still under a snow emergency and require residents to keep their cars off the streets so they can be plowed. City crews will be working to open side streets.

The Highway Assistance Teams that were staged at seven locations in Iowa during the winter storm have been deactivated. The teams consist of members from the D.O.T., Iowa National Guard and Iowa State Patrol.