You are here: Home / Crime / Courts / King speaks out against terror trials on U.S. soil 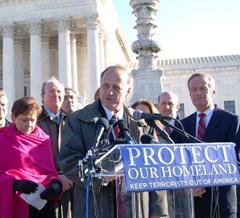 Congressman Steve King was among a group of Republicans from the U.S. House who stood on the sidewalk outside the U.S. Supreme Court building this morning to denounce the idea of bringing suspected terrorists to trial in U.S. courts. “We’re not going to grant these terrorists a beachhead on U.S. soil,” King says. “Especially we’re going to oppose granting them a beachhead in the civilian U.S. court system.”

King, a Republican from Kiron, is critical of the Obama Administration’s decision to try suspected 9/11 mastermind Khalid Sheikh Mohammed in a federal district court in New York. “Khalid Sheikh Mohammed is the worst of the worst and to send him here to the United States to try him under a civilian court when it is perfectly legal and appropriate and safe to try him under a military tribunal says that any terrorist that might be picked up — might have been picked up or might be picked up — could be brought into the United States and granted access to the U.S. civilian judicial system, also the defense paid for by taxpayer dollars,” King says. “…I think it is a colossal mistake.”

Attorney General Eric Holder announced in November that Mohammed and four other Guantanamo Bay prisoners will stand trial in New York and prosecutors intend to seek the death penalty. Holder said the U.S. “has no higher priority than bringing those who planned and plotted the (9/11) attacks to justice.” King says it’s “illogical” to try Mohammed in a U.S. court.

“Khalid Sheik Mohammed has already offered to plead guilty,” King says. “So one of the other messages is, take the guilty plea if they offer it to you and punish the man for the crimes that I believe he’s likely to have committed.” President Obama plans to close the prison in Cuba where suspected terrorists have been detained. King opposes bringing those Guantanamo Bay prisoners to a vacant Illinois prison and he says if Mohammed is tried in a U.S. court, the “Git-mo” prisoners will petition to be tried outside of a military tribunal, too.