You are here: Home / Human Interest / Mail delivery may be delayed until streets are cleared of snow 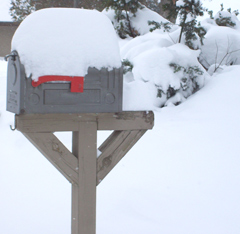 “The unofficial slogan (of the U.S. Postal Service) is neither wind, nor rain, nor heat, nor snow…but it doesn’t mention anything about blizzard conditions,” Watkins said.

“So, we’re asking for patience among our thousands of customers across the state.” Iowans who didn’t receive mail Wednesday should get it today.

“As conditions improve, local postal carriers will be…attempting to make delivery where it safe,” Watkins said. He’s urging people shovel or blow the snow off of their driveways and sidewalks, so carriers have a clear path to mailboxes. The biggest snowstorm to hit Iowa in decades arrived just in time for the Postal Service’s busiest time of the year.

“Our biggest mail processing or sorting day will be (next Monday),” Watkins said. “The mail is starting to come in now at heavier volumes.” The Postal Service’s biggest delivery day of the year, in terms of mail volume, is expected next Wednesday.