You are here: Home / Sports / Gilstrap named Big 12 Rookie of the Week 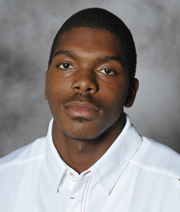 Iowa State senior Marquis Gilstrap is the Big 12 Rookie of the Week for the second time this season. Gilstrap hit a career-high 25 points and grabbed eight boards in ISU’s 87-68 win over Bradley Sunday.

Gilstrap, who averages 14.5 points, ranks sixth in the Big 12 in rebounding at 8.5 rebounds per game.

He’s scored in double figures in 10 of 11 games and his four double-doubles ties for second in the Big 12 Conference.