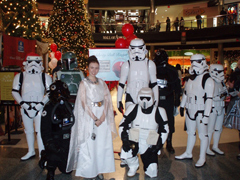 Sinister stormtroopers from the “Star Wars” movies are using their powers with the Dark Side of the Force for good in the real world.

Chris Andrews of West Branch is a T.V. producer by day, but on weekends, joins other Star Wars lovers in their white helmets and armor to collect Toys for Tots. “And then there’s the Salvation Army bell-ringing and we are notorious for getting record-breaking donation numbers during the hours that we volunteer.”

Andrews commands the Central Garrison of the 501st Legion, with some 200 members in five Midwestern states. He says the soldiers in Darth Vader’s fictional army are devoted to helping a host of down-to-earth non-profit groups.

The biggest challenge is not freezing to death while bell-ringing. His secret? “Thermals are always nice,” Andrews says, “especially when you’re talking about a stormtrooper costume because that plastic and spandex just does not keep you warm.” Some members wear rubber deep-sea-diving wetsuits to stave off the frigid winter winds.

Besides helping to promote the movies he loves, Andrews says being a stormtrooper is an entertaining way to raise funds for groups like: the American Red Cross, the American Cancer Society, Big Brothers-Big Sisters and the Make-A-Wish Foundation. So what makes people want to become a stormtrooper — the bad guys from the movies? Andrews says villains always seem to have the coolest costumes.

“Some see us at the conventions and go, ‘Wow, that’s neat. I wanna’ be that guy,’ and then some of us, like myself, find out about the work that we do in the community and see this great way to give back and be a part of the community in a way that makes sense and is fun and that’s really what hooked me.” The garrison isn’t for just anybody as the costumes have to be top quality, as if they just flew in on a TIE-fighter from the Death Star. Andrews says it’s a big investment of time and money to create the stellar outfits.

“A stormtrooper can cost anywhere from $500 to $1,500 and a Darth Vader can be $4,000 or $5,000,” Andrews says. “It depends on your skill level, too. If you’ve got sewing skills and different craft skills, you can do a lot of the stuff from scratch and can make it yourself.” Otherwise, you’ll have to hire other members of the group to build it for you, piece by piece. To learn more about the group, visit: “www.501stlegion.org“.