You are here: Home / Business / Woman gets early start on her own business 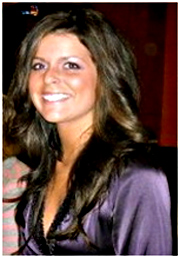 A young woman from central Iowa who graduated from Drake University this month won’t have to spend the winter hunting for a job. Twenty-one-year-old Meg Fisher, of Des Moines, is already well underway to launching her own business, known as Lincoln and Lexi.

Fisher says, “I will have a proprietary line of kids’ clothes, blankets and eventually I’ll introduce diaper bags and maternity wear.” Fisher graduated with a triple-major, earning a degree in management, marketing and entrepreneurial management.

She’s lined up designers and manufacturers for the custom, hand-sewn clothing and accessories lines in Wyoming and Arizona, but hopes to eventually have the items made here in Iowa.

Fisher admits her focused drive for success and her organizational skills have surprised a few people. “I am young,” Fisher says, laughing. “A lot of people do say that — you’re only 21 — but it’s something I absolutely love and I’m so passionate about. I wanted to start right after high school but my parents said ‘you have to go to college’ and I’m glad I did because my business definitely wouldn’t be what it can be now because of college.”

Fisher graduated from Van Meter High School in 2006. She envisions Lincoln and Lexi as a multi-level management venture, employing a team of sales representatives. The business, she says, will operate through at-home parties and baby showers, offering parents an alternative way to shop for children’s items. Fisher, fresh out of college, is single and kid-free but is already looking ahead to being a mother — and wants to have a boy and a girl. It’s those children for whom she’s named her fledgling business.

“The name started out as Bella and Beau but I found a company out in Atlanta that had the same name, so I had to change it,” Fisher says. “Lincoln and Lexi is what I want to name my first two children so that will mean something to me and I really like the feel of it.” Fisher says she already has a decade of experience in the child care industry, as she’s been babysitting since she was ten years old, in addition to being a nanny for several families.

“The kids are my inspiration and this business is a way for me to give back to them, in a sense, because they have helped create who I am today,” Fisher says. “I absolutely love all of the families that I’ve worked with.” She hopes to have some of the children’s clothing items available in January with the other components being added within the next six months. The website will be www.LincolnAndLexi.com.