You are here: Home / Weather / December ranks 2nd on the all-time snow list 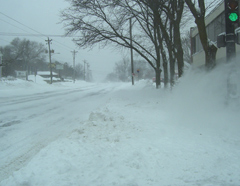 All of the information isn’t tallied yet, but the state climatologist says it is evident that December was a record month for snow. Harry Hillaker says the snow right up through the final week of the month ensured a top spot.

Hillaker says the statewide average for December of 2009 is 23.3 inches of snowfall.  That puts the month in second place for the snowiest calendar month, surpassing February of 1962 when the state got an average of 22.2 inches.

Hillaker says the big December total has the snowfall for the winter well above normal. Hillaker says November was the second least snowiest month on record with just a trace, and there was just a trace in October, but we are still ahead of the normal total for the season with about two feet of snow. Normal for this time of year is around one foot of snowfall. While the snowfall was above normal for December, the temperatures were about average.

Hillaker says the temperature is running about two-and-a-half degrees below normal, but that won’t even rank in the top 20 as far as Decembers go.