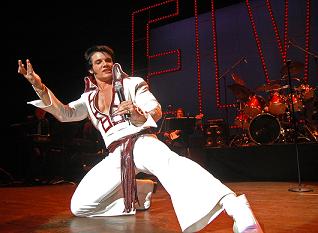 Iowans who still have a hunka’ hunka’ burnin’ love for the King of Rock-n-Roll will be able to revisit his concert experience later this month. Four men who are among the world’s best impersonators of Elvis Presley will headline the show marking what would’ve been his 75th birthday.

Brian Brigner, chief operating officer of the Las Vegas-based On Stage Entertainment, says the “Ultimate Elvis Tribute Artists Tour” will feature four eras of Presley’s work. Brigner says, “We’ll start with the 50s and then we’ll go into the movie years and we’ll actually have an Ann Margaret impersonator as part of that segment and we’ll do several hits from ‘Viva Las Vegas,’ and then we’re going to go to the ’68 comeback special which obviously was a huge event in Elvis’ career and kind of a relaunch for him after the movie years.”

The show will conclude with the King’s concert years at the International Hotel in Las Vegas. Brigner says it’ll be a faithful reproduction of the Elvis concerts of decades past, complete with all the spectacle. “There’s going to be four Elvis impersonators, one for each era, and he’s going to have a live band, dancers, backup singers, a full show,” Brigner says. “It’s going to be a large production.”

Presley died in 1977 but Brigner says his music is still very much alive. He’s anticipating fans of all ages coming from across the region to see this tribute. “It’s a grandma that saw Elvis one time in Omaha,” Brigner says. “It’s the daughter or the son that grew up listening to Elvis’ music with their parents or the Baby Boomers who caught Elvis’ career. It’s a younger generation, too. Elvis is still cool, he’s still hip. They see a lot of young folks who come to Graceland each year as well.”

The show opens in Ames on January 15th and also plays in Omaha on the 17th. For more information, visit www.legendsinconcert.com.