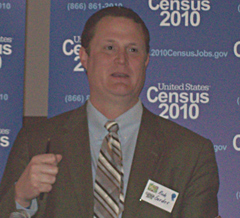 Rich Gerdes of the U.S. Census

Hy-Vee, the state’s largest grocery store chain, and the Casey’s convenience store chain are partnering with the U.S. Census, providing space in their stores to answer questions about the 2010 Census.

Rich Gerdes of the U.S. Census office in Kansas City says Casey’s will have “Be Counted” boxes with information about the Census. Part-time Census workers will staff “Quality Assistance Centers” in Hy-Vee stores throughout the region.

“If somebody has a question about ‘Do I count my kid in college or not count them?’ — they can come to those sites,” Gerdes says. “…We can give them an answer about how to fill out the questionnaire then.”

Iowans will start getting Census questionnaires in the mail in mid-March. Iowa and Minnesota tied in 2000 for the highest return rate, with about 67 percent of Iowans who received a Census form in 2000 returning it in the mail.

“We’re kind of on the homestretch now for the Census,” Gerdes says. “And at this point, we are wanting to educate everybody who doesn’t know about what the Census does and so forth.”

The funding for about 100 federal programs is distributed, based on a population formula.  According to a recent Census estimate, Iowa now has more than three million residents, but the state is expected to lose a congressional seat as other states have had far greater population gains.

Up to 5000 people will be hired in Iowa to help conduct the Census.  Learn more about the Census by clicking on the audio link below to listen to a news conference Census officials held this morning in Des Moines.