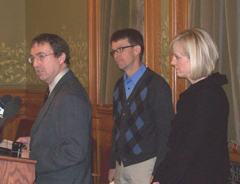 The Iowa Catholic Conference has joined with Democrats in the legislature to denounce the “payday” loan industry.  The group is calling for a 36% limit on the interest rate which can be charged on so-called “payday” loans.

At an estimated 250 locations in Iowa, clients of payday loan companies may write a personal check, put a future date on it, and receive a loan.  Critics say the problem is people end up paying as much as 400 percent interest on these loans.

“We believe that these type of interest rates are unjust and should be outlawed. Instead of promoting the financial stability of consumers, the system actually benefits more from their failure than their success,” says Tom Chapman, executive director of the Iowa Catholic Conference. “State law should protect the public from these outrageous practices.”

A bill that would enact new restrictions on payday loans cleared the Iowa Senate Ways and Means Committee last year and is eligible for debate in the full Senate this year.  Senator Joe Bolkcom, a Democrat from Iowa City, says the “loan shark rates” of payday loans need to be limited.

“As we look at 50,000 Iowans out of work during this latest downturn, I think consumer protections are needed more now than ever,” Bolkcom says.  “I think the public is fed up with financial service entities taking advantage of hardworking people and I think the time is right under these conditions of economic downturn and the sentiments of the public to act.”

According to Bolkcom, there were $1 million worth of payday loans issued last year in Iowa alone and most consumers who took out a payday loan would up with a dozen loans.

Representative Janet Petersen, a Democrat from Des Moines who is chair of the House Commerce Committee, hopes to steer a bill through her committee which would place new restrictions on payday loans, but she’s not confident a majority of committee members would support limiting the interest rate on such loans.

“The starting point for the House does not limit the interest rate,” Petersen says.  “Now if the conversation turned that we had the political willpower to get an interest rate cap, I would most certainly vote for it.”

The Catholic Conference would still like to see the interest rate limited to 36 percent. “We’d prefer to see a cap,” Chapman says.

“You take away payday, you take away car title lending — there is no other alternative source of lending,” Carney says.  “Where do these folks go who have legitimate emergencies?”

Carney says payday loan firms are not banks or savings and loans and their business model cannot be successful with a 36 percent limit on interest rates.  Carney cites reports from the Iowa Superintendent of Banking which found fewer than 20 complaints were filed by customers of payday loan companies in Iowa over a six year period in which about $4.6 million in payday loan transactions were made in the state.

“To me, that speaks volumes,” Carney says.

Other groups are joining the Catholic Conference in calling for limits on payday loan interest rates.  Iowa Citizens for Community Improvement will hold a meeting on Thursday evening in Des Moines to craft its lobbying effort on the issue.

Click on the audio link below to listen to this morning’s statehouse news conference featuring Chapman, Bolkcom and Petersen.