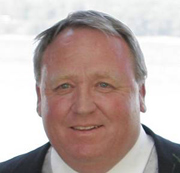 The search continues for a Cedar Rapids man who went missing on Sunday after he went for a snowmobile ride. Martin Davis had told his girlfriend he planned to ride toward North Liberty and would be back at his home in rural Cedar Rapids by 5:30 p.m. He never made it back.

Friends and volunteers have been combing hundreds of miles of snowmobile trails through southern Linn and northern Johnson County, but have found no sign of the 52-year-old Davis. Tracy Reitmeier is a friend of one of Davis’ three children.

“His girlfriend said that he left the lights on, the TV on and the door unlocked. So, it was supposed to be a short trip because he usually wouldn’t do that,” Reitmeier said. Davis was last seen at 1 p.m. on Sunday at Chappy’s Dry Dock in Shueyville.

The search party includes some employees from Clipper Windpower in Cedar Rapids, where Davis works as a maintenance man. Martin Davis is the brother of former University of Iowa wrestler Barry Davis, who is now the wrestling coach at the University of Wisconsin. The Linn and Johnson County Sheriff’s Departments, as well as the Iowa State Patrol, are helping coordinate search efforts.