You are here: Home / Politics / Govt / Two rookies among 150 legislators in new session 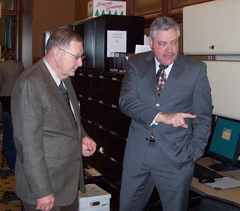 Two of the 150 legislators who have gathered at the statehouse this morning are rookies.  Curt Hanson of Fairfield was elected to the Iowa House in a special election in September.

Kirsten Running-Marquardt of Cedar Rapids also won a special election, in November, for a House seat in Cedar Rapids. Hanson admits to a few butterflies on this opening day of the legislative session.

“It’s mind-boggling,  I think it’s going to be a very interesting session,” Hanson said. “Since I’m the newcomer, whatever happens this year will become my norm and these people will feel uneasy about an 80 day session, perhaps but that’s going to be what I become used to because this is my first day.”

Running-Marquardt admitted to being nervous as she was interviewed by a handful of statehouse reporters.

“There’s a couple of first-day jitters,” she said, “especially standing here with people who are standing here right now with microphones.”

Running-Marquardt’s father was a legislator and she remembers visiting the statehouse as a child, listening to debates, but that familiarity still didn’t dampen the those jitters when she walked in this morning.

“I was a little in awe of the place,” she said.  “I mean, we have one of the most beautiful state capitols in the country — just really excited to be here today.” 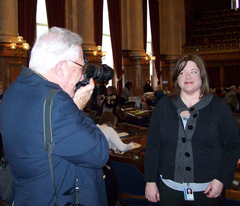 According to Hanson, entering the statehouse this morning was a sobering experience.  “I thought what a burden it is to look at the people of Iowa and try to reflect their best wishes,” Hanson told reporters.  “And how difficult it’s going to be to try to find jobs for Iowa families — working families — and try to balance the budget.”

Both Hanson and Running-Marquardt are Democrats.  The Iowa House and Senate began this morning shortly after 10 o’clock with prayers, then ceremonial speeches.

Mark Willemssen, facilities manager for the Iowa General Assembly, was one of the people who’s been working behind-the-scenes since December to spruce up the statehouse for this opening day of the 2010 legislative session.

“It’s kind of one time a year when you can do that deep cleaning,” Willemssen said shortly after 8 a.m. today.  “It’s kind of like spring cleaning, only we do it a little earlier.”