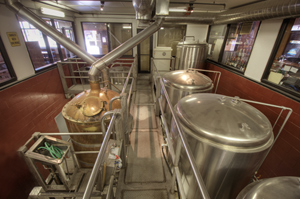 Inside the Olde Main Brewery

Beer aficionados are pushing for legislative action that would allow pubs to make brews with higher alcohol content. Currently, Iowa law does not allow native brewed beer to have a higher than 5% by weight alcohol content.

Jeff “Puff” Irvin, brewmaster at Olde Main Brewing Company in Ames, says the rules don’t allow him to craft the Imperial Stouts and Belgian-style brews his customers are demanding.

“There’s about 30% of the beer styles out there that I’m not allowed to produce right now,” Irvin said. “It doesn’t necessarily tie my hands as far as creativity, but there are a lot of styles out there that we would like to offer the public and we’d like to make ourselves. There are styles you can buy at your local stores that we’re not allowed to produce and that puts us at a competitive disadvantage.”

So called “high gravity” beers, some with alcohol levels of up to 27%, can be imported to the state and distributed by the Iowa Alcoholic Beverages Division. Thirty-five states do not limit the alcohol in beer. A bill that would remove the barrier in Iowa was introduced last year in the House, but died in committee.

Democratic State Representative Vicki Lensing of Iowa City says she’ll try to revive interest in the legislation this year. Lensing says increasing the 5% limit could serve as an economic development tool for Iowa. “It would give microbrews maybe some impetus to expand in the state and I think it’s another business that seems a natural for where we are,” Lensing said. Scott Russell of Ames enjoys sampling microbrews made in other parts of the country. He dismisses concerns that the higher alcohol content simply allows people to get drunk faster. 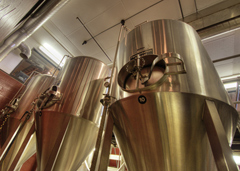 Tanks at the Olde Main Brewery

Russell says he tends to savor the gourmet brews. “Craft brews, you’re really only going to enjoy one or two of them because they are a little bit stronger in flavor…so you end up sipping this beer instead of quaffing it like you would drinking cans of domestic light beer,” Russell said.

The man in charge of distributing alcohol in the state says he’s not exactly opposed to increasing the alcohol content in beer, but adds there’s a reason the beers were once called malt liquor. Lynn Walding is Administrator of the Iowa Alcohol Beverages Division.

“I think some of these products have been repackaged as beer, but they’re more like spirits than they are beer,” Walding said. “I think it’s a little disingenuous and misleading to call them beer, especially when a product comes in at 54 proof. The beers they’re talking about, they’re aging and finishing like a scotch whiskey.”

Walding says more than 600 outlets are licensed to sell high-proof beers in the state. His division ships out about 50 brands. Some supporters of the change in Iowa law say the state’s missing a chance to tap into a new source of revenue. That’s because the designer beverages would be taxed at higher rates than mainstream beers such as Budweiser and Michelob Light.