You are here: Home / Politics / Govt / Iowans for Tax Relief members accuse Democrats of being “untruthful” 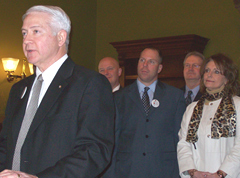 Members of “Iowans for Tax Relief” are accusing Democrats at the statehouse of “being untruthful” about their tax agenda.  The group is opposed to the idea of getting rid of a tax deduction which lets Iowans subtract what they paid in federal taxes from their state tax liability.

Iowans for Tax Relief member David Overholtzer, a Certified Public Accountant from Council Bluffs, argues Democrats have an “on-going attitude” that taxes should be hiked.

“Don’t let anybody tell you, ‘Oh, no, no.  This is not a tax increase.  We’re just playing with the deductions,'” Overholtzer says.  “They’re wrong.  They’re just being untruthful in this.”

Democratic legislators crafted a bill last year which would have gotten rid of this tax deduction while at the same time it would have lowered income tax rates.  The bill failed to pass in 2009. David Dickey, a businessman from Packwood who is also a member of Iowans for Tax Relief, suggests Democrats have an “appetite” for tax hikes.

“When those in control of our checkbook spend money the way Governor Culver and our Democrat-controlled legislature have for the past three years, they have to raise taxes,” Dickey says.  “They will tax us twice if that’s what it takes to satisfy their appetite.”

House Majority Leader Kevin McCarthy, a Democrat from Des Moines, used one word to dismiss the charges leveled by Dickey and Overholtzer.  “Balderdash,” McCarthy said when asked by reporters to respond.  A spokeswoman for the governor says Culver has repeatedly said now is not the time to raise taxes.

“And Culver has balanced the budget every day he has been Governor without doing so,” said Erin Seidler, the governor’s communications director.

Dickey and Overholtzer spoke this morning at a statehouse news conference organized by Iowans for Tax Relief.  Ed Failor, Junior — president of Iowans for Tax Relief — was there, along with nine Republican members of the Iowa House who’re sponsoring bills to enact a series of budget-cutting moves Failor has suggested.  For example, Failor is pushing for a ban which would prevent state agencies from hiring statehouse lobbyists.

“It’s…counterproductive for the taxpayers of Iowa to pay for lobbyists in excess of 100 registered lobbyists up here who come up here every day to get more of their money,” Failor said during the statehouse news conference. “It would be as senseless and as silly as Coca-Cola funding a marketing department for Pepsi.”