The keynote speaker at today’s state Martin Luther King Junior celebration says much has been accomplished, but there are still many signs that more needs to be done to achieve equality in this country.

Hardman says as an African-American, she wondered if the election of Obama as president was a fulfillment of King’s dream.

Hardman says at that moment she thought the dream may have been fulfilled, but after coming back to Iowa and writing a journal about her experience, she came to the conclusion that “Dr. King’s dream was ultimately not quite yet fulfilled.”

Hardman says there are several examples of the work yet to be done, including the recent comments by Democrat Senator Harry Reid of Nevada. “When the majority leader of our U.S. Senate says the our president ‘might be okay because he is light skinned and doesn’t speak the negro language unless he wants to’, the dream has not yet been fulfilled,” Hardman says. 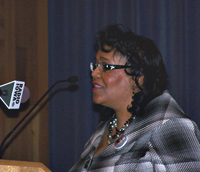 Renee Hardman of Des Moines during her address.

Hardman said Reid’s comment made no sense. “I don’t know anything about the negro language, I only know English,” Hardman says. She says King and the others of the Civil Rights movement paved the way for us today and much has been done.

Hardman says,”Although there is much work to be done, doctor King’s dream for us, to be measured by content of our character and not by the color of our skin is ever more needed today. He probably wouldn’t be totally satisfied, but I’m sure he would be pleased and proud of our collective progress and success.” Hardman ended her address with this charge.

Hardman says King did not live his life in vain, and his dream is within each of us. “We have to feel it, live it and speak it. If one man gave of his life working towards equality for each of us in this room today, can’t we each just give a little bit of ourselves to keep the dream alive?,” Hardman says. The ceremony at the State Historical Building was the 21st annual Martin Luther King Junior state celebration.