You are here: Home / Crime / Courts / Hawkeye man charged with attempting to kill his wife 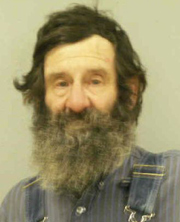 A rural Hawkeye woman is in the hospital and her husband is in jail charged with attempted murder for allegedly shooting her with a shotgun. Shortly after 11 p.m. Monday, the Fayette County Sheriff received a 9-1-1 call from a woman who said she had been shot by her husband.

Deputies found Gloria Becker in her vehicle at the intersection of two county roads, just north of Hawkeye, with a shotgun wound to her back and arm. An investigation revealed that her husband, 61-year-old Kenny Becker Senior, took a 12 gauge shotgun loaded with buckshot and shot his wife when she tried to leave their home.

Becker then barricaded himself in the home. Following a six-hour standoff with the Fayette County Sheriff and Iowa State Patrol Tactical Team, officers entered the home and took Becker into custody without further incident. He is charged with Attempted Murder.

Gloria Beck was initially taken to the West Union Hospital, then transferred to a Lacrosse, Wisconsin hospital with life-threatening injuries. The sheriff’s office seized 50 firearms and ammunition from Becker’s home. The incident remains under investigation.