You are here: Home / Politics / Govt / Governor testifies in Washington on job grants 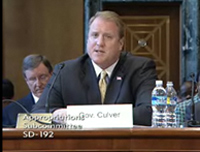 Iowa’s governor testified about job growth and preservation before a U.S. Senate panel in Washington D.C. this morning.

The subcommittee is examining how federal and state governments can work with private businesses to save and create jobs. Governor Chet Culver told how Iowa has recently gotten two major grants from the U.S. Department of Labor.

The state got a $3.9-million workforce development grant that will go to Western Iowa Tech Community College to help retrain displaced workers, in addition to a $5.9-million energy sector “green jobs” grant to help train workers to do energy audits and retrofit government buildings.

Culver quoted a report that found 48 states are facing budget shortfalls in the current fiscal year totaling 193-billion dollars, and it projected budget gaps of 350-billion dollars for fiscal 2011. Culver says the money the federal government is injecting into the states’ economies is much-needed and being put to good use. He highlighted earth-friendly efforts underway in Iowa.

“This green jobs sector is actually growing in Iowa, even during this downturn,” Culver says. “Some of our wind energy companies are hiring people again, which is a very good signal.” The governor says when the recession began in December of 2007, Iowa’s unemployment rate was 3.7%, while today, the state’s jobless rate is 6.6%, which is still one of the lowest in U.S. Still, Culver says 110,000 Iowans are now on unemployment, triple the number from just two years ago.

He told the senators how Iowa is working to forge new bonds between businesses and our places of learning. Culver told how he’d met with the owner of a manufacturing facility. The owner said his business was booming and he could hire 100 more employees if they could find workers with the right skills.

Culver says he asked the owner if he’d talked to the people at the community college two miles down the road from his business — and the reply was “no.” Culver says Iowa’s reaching out to the private sector to form partnerships with employers and trade schools so graduates can be immediately put to work.

Culver’s testimony today was before the Labor, Health and Human Services, Education and Related Agencies Appropriations Subcommittee. The panel is chaired by Iowa Senator Tom Harkin, who says people are asking, if the federal government can bail out Wall Street, why can’t it bail out Main Street?

“We need to create new jobs now in the months immediately ahead,” Harkin says. “Some people say we threw all that money out there for the recovery and it didn’t do any good, unemployment went up, but I couldn’t disagree more. Most economists give the recovery act a major share of credit for jumpstarting the moribund economy.” Harkin touted the state’s effort to develop wind energy and biofuels.

“I can’t help but point with pride to what Iowa has done in green jobs and in renewable energy,” Harkin says. “It’s been fantastic. Fifteen-percent of our power now is from renewable in Iowa and all the jobs it’s created. A lot of times, we wring our hands and bemoan the fact we’re not getting into manufacturing more in this country. Well, we are in Iowa.”

Harkin told how Iowa initially bought its wind turbines and blades from several European nations and now, all components for wind energy are being made within the state.