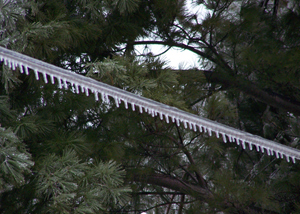 Ice on a power line.

Thousands of Iowans are still without power today after Wednesday’s ice storm coated much of the state.

He says both of those areas suffered a lot of damage in the Christmas storm and the new ice has made it worse. Reinders says there are roughly 100 utility poles down in Carroll County.

Reinders says they brought in crews yesterday and today and are bringing in additional crews today from Indiana, Wisconsin and the Chicago area, while they’ve had crews from Kansas and Missouri already working. Reinders asks the public to help them identify problems.

Reinders says they are stressing the importance of being aware of the problems with downed power lines and he says they ask anyone who sees a downed line to call the company. Reinders says this storm has been a tough one to keep up with.