You are here: Home / Fires/Accidents/Disasters / Governor, Carroll’s mayor in spat over disaster response 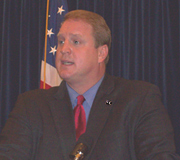 The mayor of Carroll is expressing frustration about the state’s response to last week’s ice storm, while Governor Culver is suggesting the mayor doesn’t understand the proper protocol for disaster response.  Carroll Mayor Jim Pedelty spoke with KCIM Radio in Carroll this morning.

“Friday was at least day three of our disaster and I thought if the governor were really taking this seriously he should have brought a staffer along with him who knew the programs, knew the rules, knew the regs and could tell us what steps we we’re going to have to follow,” Pedelty said this morning.  “But when he comes by himself and spend a great deal of time shaking hands and talking to news media and photographers, it does tend to make one think that.”

About half an hour before the Carroll mayor made those comments, Governor Culver was suggesting everything had been smoothed over with the mayor.

“There’s some confusion about the state’s role versus the local officials in terms of who’s responsible for what,” Culver said.

According to Culver, the state doesn’t own a lot of debris removal equipment and Carroll will have to coordinate with other cities and counties to bring in that equipment.  In addition, Culver suggests requires a locality to “exhaust all of their local options first” before calling for help from the state in removing storm debris.  Officials in Carroll estimate 90 to 95 percent of the trees in town were either damaged and destroyed by the ice storm. Culver and Carroll’s mayor spoke by phone Sunday night.

But the mayor doesn’t seem all that apologetic this morning.  Mayor Pedelty seems frustrated. “We spent the weekend trying to following up on his pledges of help and ran into stone walls here and there,” Pedelty said on KCIM Radio.  “…They’re not moving fast enough.”

The governor stressed that the state doesn’t remove debris from private property unless it’s to help utility crews restore power.  David Miller, the administrator of the Iowa Emergency Management Division, says he and the governor understand that everyone wants things cleaned up “yesterday.”

“We’ve been making progress,” Miller says. “I know it’s not near as fast as a lot of people would like, but the progress has been there.”

(Reporting in Carroll by Jeff Blankman of KCIM Radio)