You are here: Home / Business / Harkin a “no” on giving Fed chair another go 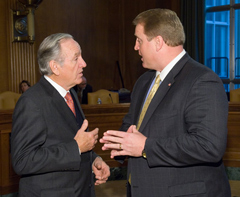 Senator Tom Harkin says he’s “tired of being held hostage by Wall Street” and he plans to vote against giving the chairman of the Federal Reserve another term.

Ben Bernanke’s first term as Federal Reserve chairman expires this weekend and Harkin, a Democrat, is among a growing group of senators who’re expressing concerns about the way Bernanke’s handled economic policy.

“I just think Mr. Bernanke is going to continue the policy of The Fed of taking care of the big financial institutions and to heck with Main Street,” Harkin says.

Harkin faults Bernanke for the handling of the Wall Street bailout. “Mr. Bernanke gave away trillions of dollars of taxpayers’ money to AIG at almost zero percent interest rate, and then they turned around and they held their counterparties — French, Germans, Swiss and many others — harmless. They didn’t have to take a hair cut at all,” Harkin says, “They got paid off in full and yet we (taxpayers) lost trillions.”

Business interests have been lobbying to support Bernanke and officials in the Obama administration were meeting with key senators, urging a “yes” vote on Bernanke.  Harkin is unmoved.

Harkin is among at least 17 senators who’ve publicly announced they will oppose Bernanke’s confirmation for another term.  Harkin, though, says the “voices” of those opponents aren’t yet being heard.

Harkin made his comments during a telephone interview with Radio Iowa. Earlier today, Iowa’s other U.S. Senator — Republican Chuck Grassley — said he hadn’t yet decided how he’ll vote on Bernanke’s nomination.